When you first meet someone and start dating there’s an air of mystery and you always put your best foot forward. In an ideal world one would always be put together and giving their best, but the reality is that the longer you are with someone, the more comfortable you get, and the more you realise that the honeymoon period is over and the reality of real love sinks in. Here are 5 hilarious ways that you know the honeymoon period is over. 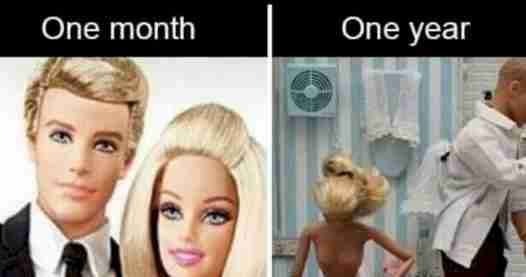 This may not be what happens in everyone’s relationships, but in a lot (like mine) any semblance of privacy in the bathroom is completely forsaken! From brushing your teeth whilst your partner is in the shower or even having a wee with the door open whilst they pop in and out for stuff you know that the privacy you once had has been lost. In the rare instance that you lock the door you’ll probably be met with bewilderment. That’s one way you know that the honeymoon period is over.

On the subject of lack of privacy for things that one usually would like privacy for and another way you know the honeymoon period is over is when you have the first instance of passing gas (from either end). Men don’t seem to have any qualms about going for it, but as a woman the first time that you accidentally pass gas or belch loudly after a meal, well, it’s quite a defining moment. The level of comfortableness has gone from 3-10 and you have now entered a new stage of your relationship. Congratulations.

This may come sooner for some and later for others but the moment when you stop holding back and let out that loud sigh and eye roll when your partner does something annoying is the moment that go from dating to really comfortable in the relationship. When he realises that you have an eye rolling problem and still chooses to do annoying things it must mean that he loves seeing those eyes roll, right?

4) You Get Ready When you Want to Get Ready 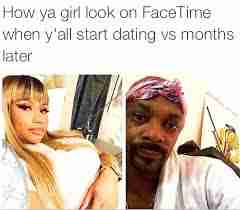 You know that cliche or women not getting dolled up once they are comfortable in a relationship, well, it’s kinda true. In our defence ain’t nobody got time to get ready and look 100% hot all the time. We are hot without all the makeup and eyelashes anyway. Besides, sometimes we get all dolled up only to take blog photos or film a YouTube video and that’s how it is. #truestory

5) You Eat Whatever You Want to Eat

The days of eating like a bird are gone and you go from an order of 4 chicken nuggets to an order of 20, large fries, and a large Coke. For yourself. Followed by a McFlurry, because duh, dessert. Eating at a restaurant? The salad becomes a steak with chips and you go from a bottle of water to a pint of beer. Why? Because the honeymoon period is over baby, that’s why.