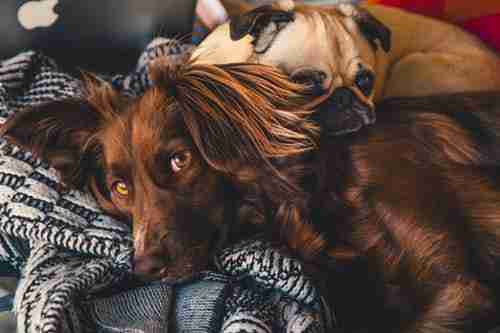 We all love our pets, don’t we? Even though they may not be famous pets, as such!

And not only do we love our pets, most of us also love taking loads of photos of them. With the rise of social media, we’ve seen a massive trend towards celebrities creating and running Instagram accounts for their dogs and cats — some of them attract tens of thousands of followers between going to sleep at night and waking the next morning!

Which are the best celebrity pet Instagram accounts of 2018?  Check out which ones you’re not following and try and guess the owner by looking at the photo.

This cute golden Labrador pup is the pet of former Olympic gold medallist and current reality TV star, Caitlyn Jenner. Named Bertha, she was adopted in June 2017, and has been a regular on Caitlyn’s social media accounts.

However, in December 2017, Caitlyn was left panicked when she returned to her Malibu home to find the roof of her home blown off by powerful winds. Bertha was nowhere to be found. Fortunately, a workman who had come to help clean up the damaged house spotted Bertha on his way to the site, and soon, dog and owner were reunited.

This beautiful white-haired Birman cat is the pet of Chanel’s iconic creative director, Karl Lagerfeld. Born in 2011, Choupette was a gift from model Baptiste Giabiconi, and is one of many celebrity pets to have her own Twitter and Instagram accounts — “Soon, people will talk more about Choupette than me!” said Lagerfeld.

Choupette has inspired many fashion pieces since she entered Lagerfeld’s life and has even starred in a number of photo shoots. Strangely, the fashion icon admitted that he wanted to actually marry his pet one day, although this wish hasn’t yet materialised!

Comedienne Miranda Hart loves her pet Peggy, a Shih-Tzu/bichon frise cross. So much so that she even wrote a book about her entitled “Peggy and Me”, admitting that: “Owning Peggy was the only thing that qualified me as an adult.”

Miranda also took her book to the stage at the London Palladium. She adopted Peggy after the pup was brought to the filming of the sitcom, Not Going Out. Since then, Hart and Peggy enjoy bike rides around West London and holidays around the UK.

This French Bulldog is the prized pet of global star and fashion icon, Lady Gaga. Born in 2014, she has the nickname ‘BatPig’ and was given her own Instagram account by Gaga in 2015.

The very pampered pooch has modelled with her famous owner several times, including on the cover of Harper’s Bazaar. She’s also been snapped in the same kinds of extravagant costumes Lady Gaga wears. Gaga also has two other French bulldogs, Koji and Moonpig.

To really promote “Brand Beckham”, every member of the famous family has to have their hand, or paw, on the steering wheel. The Beckham’s pet is a cocker spaniel named Olive. She joined the family in 2015. Since then, she’s bagged her own Instagram account and a role on a TV advert with David!

Olive is the latest four-legged Beckham to join the famous family, following shar-pei, Barnaby, and bulldogs, Coco and Scarlet.

Adopted in 2015 with around 104,000 followers on Instagram, Miley Cyrus’ cat — Shanti Om Bb — is a big deal in the celebrity feline world. The choice of name for the fluffy, bright-white pet cat may appear unusual, but it apparently means ‘peace’. Although it’s unclear whether it was Shanti or another of Mileys’ cats that left her with bloodied scratches on her head and arm in 2016.

Cyrus has such a huge collection of famous pets — including dogs, fish, pigs, and cats — that it’s hard to keep a track of how many animals she actually owns! So, how large a pet-family Shanti Om Bb is a part of is anyone’s guess! However, we do know that Cyrus is especially fond of looking after her pet pigs — one of which apparently receives manicures and sleeps on the sofa.

Singer and actress Demi Lovato, is another proud pup owner who has created a popular Instagram account for her dog, Batman. The all-black Yorkipoo joined the Lovato’s in 2015 but didn’t get his own account until March 2017!

Lovato decided to adopt Batman after losing her beloved pet, Buddy, who was tragically killed by coyotes. To date, Batman has around 70,000 followers.

The tragic death of Star Wars legend, Carrie Fisher, in 2016 brought a huge outpouring of grief all over the world. But did you know that the legendary actress’ beloved pet dog, Gary, is still regularly updating his Instagram account?

With a massive 195,000 followers, Gary Fisher is one of the most famous pets of Instagram. He now lives with Carrie Fisher’s former assistant, Corby McCoin. The pooch is also big on Twitter, and a special video showing Gary excited whenever he saw Carrie on screen during a showing of Star Wars: The Last Jedi — was liked around the world.

The French bulldog’s fame doesn’t stop there. He made a cameo appearance in Carrie Fisher’s final Star Wars film dressed up as an alien and sat on Graham Norton’s sofa with his owner during an interview in 2015!

Former holder of the title of “First Dog of the United States”, Bo and younger companion, Sunny, enjoy very full lives as pets of ex-President, Barack Obama, and his family. Bo, born in 2008, was the Obama family’s first pet when they moved into the White House and was given as a gift by Senator Kennedy.

Bo officially entered the White House in April 2009 and was soon joined by Sunny, who was born in 2012 and was introduced to the world by Michelle Obama on Twitter in August 2013.

Although Sunny is all black and Bo has patches of white, the two famous pets look remarkably alike. When asked if he would allow his pets into the iconic Oval Office, Obama replied: “of course”. Since Obama left the White House, the two Portuguese water dogs have been spotted adjusting to life out of the public eye at their new home in Washington D.C.