It’s a well-known fact that I have been obsessing over skin care products for the past year or so. Sure, that might have to do with the fact that I have hit the 30+ mark. Or it could just be that one of the reasons I don’t look my age is because I have pretty good skin. In my twenties I didn’t really care about caring for my skin to have it look its best, now that I am 33, well, that’s another story.

Garnier recently launched their Moisture Bomb* range consisting of a Super-Hydrating Antioxidant Moisturiser with SPF 10 for the day, and the Super-Recharging Antioxidant Gel-Cream for the night. The latter which claims to ‘hydrate up to 10 layers of skin’. I was recently given the opportunity to try out the new range, and I have been using them since they landed on my doorstep. So how good is the Moisture Bomb range? Let’s find out.

The claims vary between each of the products. But one of the things that both creams have in common is that they are both said to offer fantastic hydrating effects, and are catered to dehydrated skin. Both of the creams also contain antioxidant pomegranate & amla extracts. They also have 7% and 15% plant serum, with the night cream containing the most amount.

The Moisture Bomb Day Moisturiser is said to be right for anyone whose skin shows the effects of time and your lifestyle’. The basic claim is that this cream will hydrate your skin and help preserve its youthful appearance.

The novelty that the Moisture Bomb Day Moisturiser provides is essentially an ultra-light texture, that means you shouldn’t have a greasy or sticky effect after using the product.

Another of its star claims is its inclusion of two antioxidant super fruit extracts – Pomegranate, and Amla. Both are meant to help combat the day to day exposure to, well, everything our skin has to face.

The Moisture Bomb Night Moisturizer’s biggest claim is the ability to hydrate up to 10 layers of skin. That’s a pretty big claim if you ask me. Packed with 15% plant serum which will give your skin hydration for 72 hours, as well as giving it the appearance of being ‘recharged’.

Along with the day cream, the night gel-cream includes Pomegranate and Amla superfood extracts and claims to no greasy or sticky effect.

Now to see if those claims have any basis in reality!

The Trials – The Day Cream

The first product in the range I began using was the Garnier Moisture Bomb Super Hydrating Antioxidant Moisturiser with SPF 10. For the purpose of brevity, I shall call the Garnier Moisture Bomb Day Cream the ‘day cream.’ I have been using this day cream every morning after washing my face, and so far I must say I’m liking it.
The tube of product is packaged inside a smart looking glossy box. It has a sombre effect that begins with a sleek silver and ends up with a cool blue. The box itself has quite a fresh appeal and made me instantly interested into what was waiting inside.
Inside you will find a bright blue plastic tube with a 50ml worth of product. The top is just a clear plastic lid that houses the pump that dispenses the product. I quite liked that feature, as I find it much easier to dispense the product. It’s also easy to calculate the perfect amount that I need.
One of the most pleasant things about the product is the scent, which is one of my favourite things about Garnier as a whole. I have yet to encounter a Garnier product that doesn’t have a fresh scent. For my very keen nose, it initially came off as a little strong. However, once the product is on your skin and blended well the scent becomes very light and doesn’t seem to linger excessively.
My favourite thing thus far is the texture. Once on your skin, the day cream seems to melt right in, and leave your skin with a velvety texture. It reminds me a bit of the velvety feel a primer leaves behind.
***Moisture Bomb Day & Night Cream*** 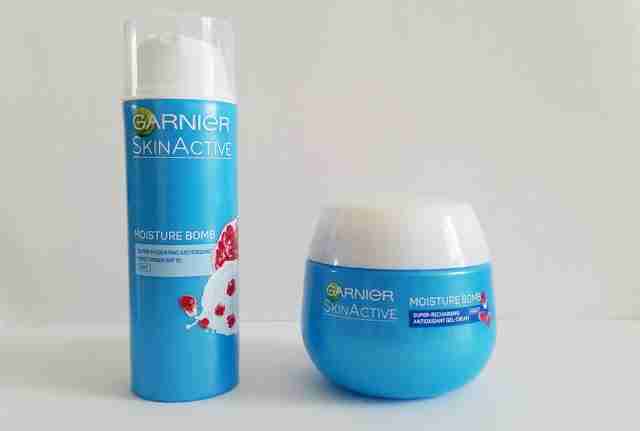 Buy it at: Boots | Superdrug | Amazon

Just like the day cream, the packaging of the night cream is a box, but different to the day cream. I was immediately a bit ‘meh’ about the plastic bottle the cream came in. It’s basically the same material as the day cream, but the little tub looked a bit cheap to me. For whatever reason, I just am not really liking it. I like the shape of the container, but the plastic not so much.

The first thing that you notice about the night cream once you open the tub is the texture. You’ll immediately notice how unique the colour and the texture appear to be. It instantly reminded me of hair gel, and I was immediately drawn to it. Unlike hair gel though, the gel-cream quickly dissolves into your skin and leaves a smooth texture behind.

The scent between both creams is quite similar, apart from the night cream being a tad bit more potent and lingering a bit more on the skin.

I have had to decrease the amount that I use on my face as I have found it to a bit too hydrating. In fact, I’ve been waking up with a very oily t-zone. So I’ve decreased the amount I have been using to a ridiculously small amount. I’ve applied very little if any to the t-zone and the results have been quite pleasant ones.

After using both products as part of my routine for 6 days I can see the plumpness and hydration effects on my skin. The best thing about the formula is how light it feels, and how easily it is absorbed into the skin. The texture lives up to the claims.

My skin looks youthful and healthier. I am really pleasantly surprised! My skin has a fresh appearance, and more than just the looks, it actually feels soft and supple.

Initially, I was a bit unsure of whether or not I would continue using the Garnier Moisture Bomb creams, since my skin felt as a bit oily, especially after using the night cream, but after sticking with the routine it all seems to have balanced out. So far I really like them, and at the very affordable price range, you really can’t go wrong.

Have you tried the Garnier Moisture Bomb range?