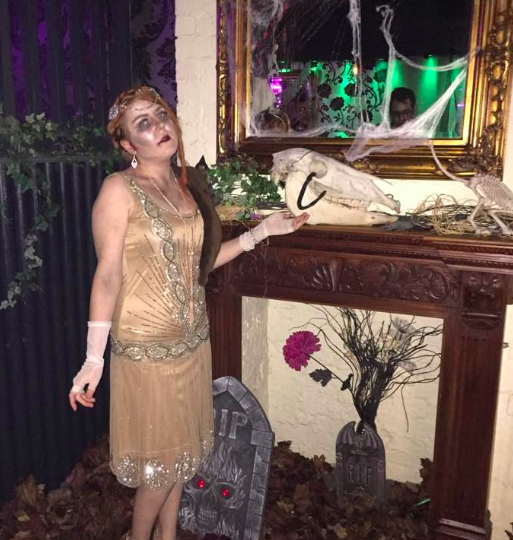 I adore it when October starts as to me it is the beginning of “Halloween season” – yes, Halloween. Season. It’s kinda like a creepy Christmas but with less tinsel. I love to spend my time over October and browsing pinterest for Halloween costumes and Party inspiration. I have also lost hours (ok, more like days of my life) getting my creative juices flowing on social media such as Instagram and Twitter using hashtags such as #halloweencostume #halloweenmakeup. There are some very talented people out there!

When It comes to trick or treating, I am a bit in love with the idea of making all of my own treats…I mean who wouldn’t be super delighted to be served these snacks at any Halloween party? And so much fun to make!

Argh-mazing! ( See what I did there?)

Or course, the Halloween season fun doesn’t stop there as I love to fill the month creating fabulously creepy playlists and watching scary movies and TV shows. To be fair I have watched that many that I have now become an expert in horror movie tropes. Which is why I was delighted when I saw the results from this survey which investigated how the British public felt they would fare if they were in a horror movie situation.

The survey was performed by giffgaff – who adore Halloween so that they have even got a snazzy little Halloween Hub on their site, complete with a retro Halloween costume generator. Turns out when I was born, everyone was dressed as Ghostbusters – am I showing my age here? Hours of Halloween fun, right there…..but back to the survey and as far away from my age as possible.

The research revealed that over half of us (55 percent) have a plan for survival should a zombie apocalypse happen…I mean, who doesn’t? I have a few different escape routes planned, but that’s just being vigilant am I right?

When it comes to surviving zombie attacks, 15 percent of us would head for a river or the sea to try and find a boat to escape the hordes of flesh-eating zombies, while one in ten favour high ground, planning to climb to the top of a tall building and make camp.

A further 13 percent claimed they would take inspiration from the movie Shaun of the Dead and head straight to the local pub for a lock in (this is totally what I would do….)

14 percent of the nation would jump in a car and drive away as fast as they could, while a brave 17 percent said they would discover the zombies’ weak spots and attack back.

And a genius 13 percent said they would pretend to be a zombie themselves to try and escape …ooooh clever! There are some really smart people out there.

In fact, the average person felt they had the capabilities to kill as many as 29 zombies…wow. Depending on the weapons of course..The full results are below and make funny reading!

THINGS BRITS WOULD NOT DO IN A HORROR FILM…

So do you have an escape plan for a Zombie apocalypse this Halloween season? Is there something that you simply wouldn’t do in a horror films (erm, go out on your own after saying “I’ll be right back, anyone?’) and do you agree with the survey results, have they missed anything out? If so let us know below or continue the conversation on our social channels.

Guest post by the lovely Emma Carney of  Bunny Pudding

Reasons To Use Unique Custom Badges

Is is Really That Hard to Become British?

Giveaway! Win £50 to Spend at My-Picture.co.uk